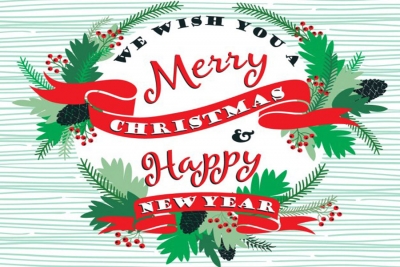 We wish people a ‘Happy Birthday’, and if you’re in the USA in November and December you might say ‘Happy Holidays’, so why do we say ‘Merry Christmas’ more often than ‘Happy Christmas’?!

Saying ‘Merry Christmas’ rather than ‘Happy Christmas’ seems to go back several hundred years. It’s first recorded in 1534 when John Fisher (an English Catholic Bishop in the 1500s) wrote it in a Christmas letter to Thomas Cromwell in 1534 “And this our Lord God send you a mery Christmas, and a comfortable, to your heart’s desire.”

There’s also the carol “God Rest You Merry, Gentlemen” which dates back to the 16th century in England. It comes from the West Country in England and it was first published in the form we know it today in 1760.

In the English language of the time, the phrase ‘Rest You Merry’ didn’t mean simply to be happy; ‘rest’ meant “to keep, cause to continue to remain” and ‘merry’ could mean “pleasant, bountiful, prosperous”. So you could write the first line as “[May] God keep you and continue to make you successful and prosperous, Gentlemen” but that would be hard to sing!

The comma in the phrase should be AFTER the ‘merry’ not BEFORE it! But it’s often put after the merry which changes the meaning to make ‘merry Gentleman’ and so a ‘Merry Christmas’!

The term ‘Merry Christmas’ might well have been made very popular in 1843 from two different sources.

The first Christmas Card, sent in 1843 by Sir Henry Cole, had this wording on it: “A Merry Christmas and a Happy New Year to You”.

The Carol “We Wish You a Merry Christmas [and a Happy New Year]” is another old carol from the ‘West Country’ (South West England) but was only first published in 1935 and this probably confirmed the use of ‘Merry Christmas’ over ‘Happy Christmas’.

Make sure you enter the (*) required information where indicated. HTML code is not allowed.

Thank you for being with us